skip to main | skip to sidebar

A potted guide to stackless coroutines

Keen-eyed Asio users may have noticed that Boost 1.42 includes a new example, HTTP Server 4, that shows how to use stackless coroutines in conjunction with asynchronous operations. This follows on from the coroutines I explored in the previous three posts, but with a few improvements. In particular:

The result bears a passing resemblance to C#'s yield and friends. This post aims to document my stackless coroutine API, but before launching into a long and wordy explanation, here's a little picture to liven things up: 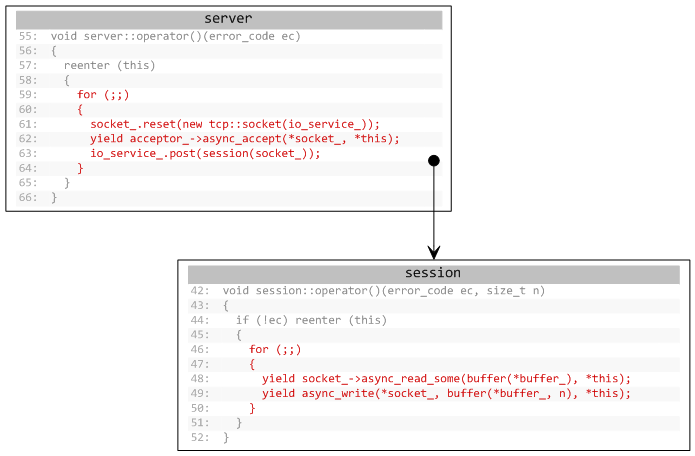 [ Click image for full size. This image was generated from this source code using asioviz. ]

Every coroutine needs to store its current state somewhere. For that we have a class called coroutine:

Coroutines are copy-constructible and assignable, and the space overhead is a single int. They can be used as a base class:

or as a data member:

or even bound in as a function argument using bind() (see previous post). It doesn't really matter as long as you maintain a copy of the object for as long as you want to keep the coroutine alive.

and if a data member or other variable you can write:

When reenter is executed at runtime, control jumps to the location of the last yield or fork.

The coroutine body may also be a single statement. This lets you save a few keystrokes by writing things like:

This form of the yield keyword is often used with asynchronous operations:

This divides into four logical steps:

When the asynchronous operation completes, the function object is invoked and reenter causes control to transfer to the resume point. It is important to remember to carry the coroutine state forward with the asynchronous operation. In the above snippet, the current class is a function object object with a coroutine object as base class or data member.

The statement may also be a compound statement, and this permits us to define local variables with limited scope:

This form of yield is often used in generators or coroutine-based parsers. For example, the function object:

defines a trivial coroutine that interleaves the characters from two input streams.

This type of yield divides into three logical steps:

This form of yield is equivalent to the following steps:

This form might be applied when coroutines are used for cooperative threading and scheduling is explicitly managed. For example:

The final form of yield is adopted from C# and is used to explicitly terminate the coroutine. This form is comprised of two steps:

Once terminated, calls to is_complete() return true and the coroutine cannot be reentered.

Note that a coroutine may also be implicitly terminated if the coroutine body is exited without a yield, e.g. by return, throw or by running to the end of the body.

The fork pseudo-keyword is used when "forking" a coroutine, i.e. splitting it into two (or more) copies. One use of fork is in a server, where a new coroutine is created to handle each client connection:

The logical steps involved in a fork are:

The functions is_parent() and is_child() can be used to differentiate between parent and child. You would use these functions to alter subsequent control flow.

Note that fork doesn't do the actual forking by itself. It is your responsibility to write the statement so that it creates a clone of the coroutine and calls it. The clone can be called immediately, as above, or scheduled for delayed execution using something like io_service::post().

chris
Author of the Boost.Asio library for networking in C++.